Sunday, September 23 from 15 to 19 in Certaldo Alto will take place the medieval fantasy treasure hunt that will challenge about thirty teams, organized by the Pro Loco Certaldo, with the sponsorship of the City of Certaldo and the collaboration of Elitropia, Arcieri Certaldesi , Fantasy Club (Vinci) and Dark Wolves GRV

The title and the basic idea for the storyboard were taken from the famous fantasy novel “Heart of Ink”, the work of Cornelia Funke, in which the characters of the book come to life to become protagonists of intriguing and mysterious adventures. Certaldo Alto for an afternoon will turn into the ancient town of Collecerro where, among market stalls, unlikely characters, elves, thieves and magic, hundreds of participants are expected in medieval fantasy clothes that will have to unravel between deceptive questions and unpredictable spells to bring term a very particular mission.

Few are the details given to know except the fact that today in the village the Regent has issued a warning:

“Notice to the citizens, The coven of the treacherous Blue Magicians  is back to strike.

After their defeat in the Battle of Castel Maggio and the consequent Exile in the Tower of Cullovestia it seemed that everything was going right: the magic seals of the tower had absorbed most of their powers, reducing the 3 Blue Archmages in almost absolute impotence. But something interfered. The seals have been broken and the Archmages have been freed thus having the opportunity to reorganize themselves. With arcane magic rituals have awakened, directly from the pages of books, some characters whose powers longed to take possession.

The characters, once projected into our world and emptied of their powers or magical objects have become tragic ghosts of themselves or terrible creatures in disarray … The result is that around the kingdom there are strange figures, lost, wandering aimlessly , dispersed in a world that is not theirs; while the power of the Blue Magicians grows every day more.

The Kingdom needs a handful of adventurers who want to embark on the path of Glory and Honor: the way that will lead to the return of the characters of the Books in their world and that will also inevitably lead to the final battle with the Blue Arches. The city of Collecerro, although it can not participate in the fight, will provide its most powerful Mages to teach the path of Magic to a Magician apprentice for any team of adventurers. Gather a bunch of Heroes, name an apprentice Wizard and … get ready for the fight! Remember that a future for us all will always exist: your task is to determine if this future will be in slavery or freedom …

The challenge is therefore open again. Will the teams be able to foil the threat? Every question and curiosity will be answered on facebook at the page of the “medieval fantasy treasure hunt” or the “proloco certaldo”. The event is aimed not only at the passionate fantasy but also the simple curious who wants to spend a non-traditional Sunday by dressing the clothes of a refined lady or a bold archer.

All information, regulations and an example of development can be downloaded from the homepage of www.prolococertaldo.it. 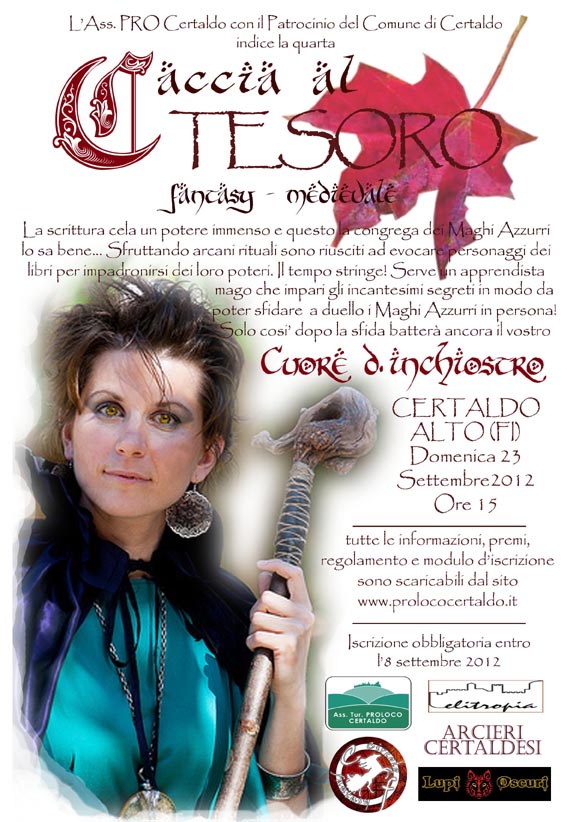