CERTALDO – There are 38 registered teams and almost 200 participants, not counting the photographers who will appear at the village for the related contest. With these numbers, the sixth edition of the medieval fantasy style treasure hunt “L’ultima illusione”, which will take place on Saturday 18th October from early afternoon to around 11 pm in Certaldo Alto, promises to be a success.

Dedicated to the theme of illusionism, the hunt will range over themes that will go from the Middle Ages – of which Certaldo Alto is a precious witness -, up to a hypothetical and future science fiction.

“This initiative testifies to the cultural vitality that the Pro Loco and our associations have, thanks to which the medieval village is valued in a new way – says the councilor for culture and tourism, Francesca Pinochi – the treasure hunt in particular, offers opportunities to socialize and learn about the urban fabric while having fun. Thanks to the historical game, participants, residents and tourists meet, it creates a pretext to deepen our knowledge of our heritage and promotes Certaldo, thus combining culture and tourism “.

“The event was born almost as a game from a personal passion for role-playing games – says Vice President Pro Loco, Filippo Gianchecchi – but thanks to the Pro Loco who believed in it, the City of Certaldo that supported it and the various associations that collaborate, has become an event that attracts public from all over Tuscany. And since last year, the nightly and photographic contest offer something more “.

An event that really has something “magical” if, as Francesco Bianco and Matteo Romani said, other associations were born here: “Our partnership was born in Certaldo, after the second edition of the hunt, when we touched with hand is the beauty of the event that the charm of working with friends to build something and enhance their country – say the representatives of the association “Second Sons” of Pisa, which are the co-organizers of the sixth edition of “hunting” alongside the Pro Loco certaldese – we invite everyone to Certaldo Alto Saturday, October 18, because it will be a real party, made of sets and theatrical situations, which we have built around the theme of illusion and that can be enjoyed by both participants and the public “.

From the Pro Loco, with the president Daniela Brenci and the councilor Cosimo Dani, thanks also to all the other associations that have collaborated: the Circle Fantasy and Lune of Raptek di Vinci, Ideas in motion of Sieci, Domus culture of Massa, Elitropia, Arceri certaldesi, Drago Nero. And a special thanks to Filippo Gianchecchi for having believed in this project and having realized it also in 2014, despite the difficulties that were feared at the beginning of the year.
Access to Certaldo Alto during the treasure hunt is free, as is participation in the photographic contest. The photos taken will then be exhibited at the Boccaccio Bar. During the treasure hunt a short documentary film will also be made by the director Costantino Maiani. Expect a large crowd and above all colorful, also because among the prizes there will be also those for the best costume, both single and team. 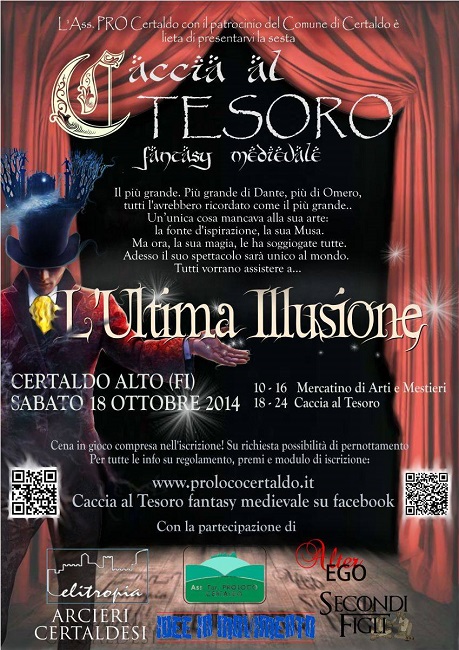